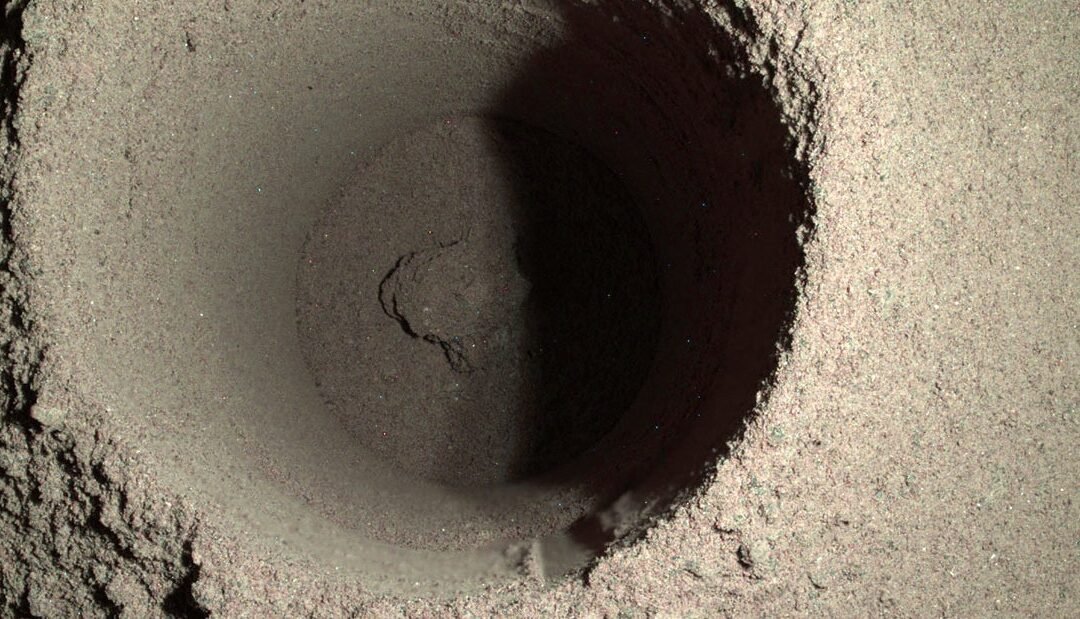 Last week, NASA’s Perseverance rover shot for a new milestone in the search for extraterrestrial life: Drilling into Mars to extract a plug of rock, which will eventually get fired back to Earth for scientists to study. Data sent to NASA scientists early on August 6 indicated a victory—the robot had indeed drilled into the Red Planet, and a photo even showed a dust pile around the borehole.

“What followed later in the morning was a rollercoaster of emotions,” wrote Louise Jandura, chief engineer for sampling and caching at NASA’s Jet Propulsion Laboratory, in a blog post yesterday describing the attempt. While data indicated that Perseverance had transferred a sample tube into its belly for storage, that tube was in fact empty. “It took a few minutes for this reality to sink in but the team quickly transitioned to investigation mode,” Jandura wrote. “It is what we do. It is the basis of science and engineering.”

By now, the team has a few indications of what went wrong in what Katie Stack Morgan, deputy project scientist of the Mars 2020 mission, calls “the case of the missing core.”

“We’ve successfully demonstrated the sample caching process, yet we have a tube with no core in it,” she says. “How could it be possible that we have carried out all of these steps perfectly and successfully, yet there is no rock—and no anything—in the tube?”

One theory, of course, was that the rover had simply dropped the core sample. But there were no broken pieces on the surface. Also, Stack Morgan says, the tube was “very clean, not even dusty, suggesting that there was perhaps nothing that had ever gotten into the tube.”

NASA scientists now think that the core was actually pulverized in the drilling process, then scattered around the borehole. “That would explain why we don’t see any pieces in the hole and why we don’t see any pieces on the ground, because they have basically become part of the cutting,” says Stack Morgan. “So we started to think about why that happened, because that is not a behavior that the engineers saw in the very extensive test set of rocks that they cored prior to launch.”

Perseverance is drilling in Jezero Crater, which used to cradle a lake, and therefore may have been home to ancient microbial life. (It’s been relying on the Mars helicopter, Ingenuity, to scout ahead for spots to dig.) By digging into the rock instead of just sampling dust at the surface, the rover will provide vital clues about the geological history of the planet. The Curiosity rover, which landed on Mars in 2012, also drilled, but it was designed to grind the rock instead of extracting cores. This time, NASA engineers want samples that let them observe the rock as it was laid down so they can analyze it for hallmarks of life—some microbes, for instance, leave behind characteristic minerals.

For Perseverance, the drilling process actually begins inside the rover, in a section called the adaptive caching assembly. Here, a robotic arm takes a tube out of storage and inserts it into the “bit carousel,” a storage container for all of Perseverance’s coring bits. The carousel then rotates, presenting the tube—which is about the same shape and size as a laboratory test tube—to the 7-foot-long arm that’ll actually do the drilling. “We pick up that coring bit, and that has the tube inside,” said Jessica Samuels, surface mission manager for Perseverance, in an interview before the first drilling attempt. “And now at that time we’re ready to actually acquire the sample.”