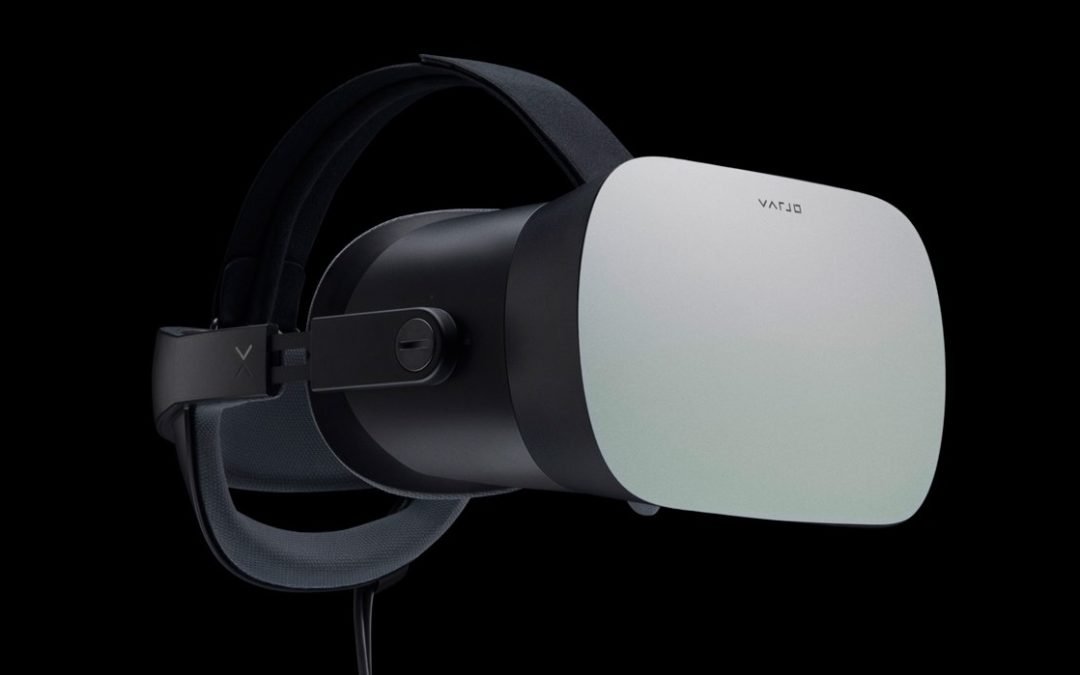 Parked in a Berlin platz at night, the concept car gleams, city lights dancing off its sinuous lines. I crouch down next to its hood to admire its shape, and as the paint twinkles, a word etched faintly on the tire catches my eye. SPEEDGRIPP. Each letter pristine, unbroken, like the tire’s never seen a mile of road, like it’s been airlifted from some secret factory. It’s not like anything I’ve seen before—and certainly not in a VR headset, where print legibility goes to die.

Credit the resuscitation to Varjo. The first time I saw the Helsinki company’s prototype headset, nearly two years ago, it was little more than a kludge: an Oculus Rift that Varjo had rigged to project an ultra-high-resolution micro display into the center of my field of view. Rift or no Rift, it was the most stunning clarity I’d ever seen. It’s better now. It’s also a finished (and Finnish) device.

Varjo bills the VR-1, which goes on sale today, as “the world’s only professional VR headset with human-eye resolution.” The word “professional” is key here, though: While the VR-1’s mirror-polished eyebox and unprecedented visual fidelity make it feel like an artifact from the future, its $5,995 price tag makes clear that this isn’t a device for everyone. Specifically, it’s not for consumers. But for Airbus, Audi, architecture firm Foster + Partners, and dozens of other companies who participated in Varjo’s beta program over the past year, any sticker shock pales next to the benefits they’ll see in the long run.

In the enterprise world, your VR headset isn’t for games or social experiences, it’s for work. So a company’s feature wishlist is maybe a little bit different. You don’t need it to be completely untethered, because you’ll be sitting at your workstation. Instead, you want it to work with your professional design or rendering software of choice, whether that’s Autodesk VRed, Unreal, Lockheed Martin’s Prepar3D, or any of a half-dozen others. You also probably want it have eye-tracking, especially if you’re using the headset for training and simulation.

Those were things the Varjo team kept hearing as they worked with early partners, and as they grew from 12 employees to over 100 (thanks in large part to a $31 million Series B round last year). “This is something that was done with the professionals, for the professionals,” says Varjo CMO Jussi Mäkinen. “It’s not a consumer product retrofit for the professional market.”

So that’s what the company tried to do. Like the original Rift-rigged prototype WIRED first saw, the VR-1 uses a Sony microdisplay that packs a 1920×1080 display into less than three-quarters of an inch, then projects that onto the center of a more conventional OLED display. Things have changed, though. For one, there are two microdisplays, one embedded in each side of the headset, which along with Varjo’s optical system helps expand that 63 pixel-per-degree “bionic display” sweet spot to 31 degrees by 18—comparable to the Microsoft Hololens’ field of view.

That might not sound big, but remember that an AR headset is only sweet spot. On the VR-1, everything outside of the sweet spot—what Varjo calls its “peripheral display”—is a beast in its own right. Based on twin 1440 x 1600 OLED panels from Taiwanese manufacturer AUO, it delivering a slightly higher pixel density than the Vive pro, albeit in slightly smaller field of view. The overall effect, Konttori says, is comparable what HP is designing in its next-generation “Copper” prototype, also geared at the professional market.

A tale of two headsets: the virtual interior of an Audi as rendered in an HTC Vive Pro on the left, the Varjo VR-1’s “bionic display” on the right.

In practice, though, that’s just the window dressing. A series of new demos I experienced last week highlights why Varjo’s bionic display might be a difference-maker for automakers, architects, and airlines alike.

First, a flight simulator, with me in the pilot’s seat. Just as with the first time I tried Varjo’s prototype, the instrument panels weren’t simply clear, but legible, down to the smallest glowing digits or labels on a switch. If you’ve spent any time in a VR headset, you’re familiar with the difficulty of reading text. The sweet spot took up a good chunk of the center of my vision, so anywhere I looked was as clear as if I was looking at it in real life. (An odd, almost wavelike visual effect kicks in in your peripheral vision when you move your head around, due to the contrast between the two displays. It’s the sort of thing that might be an annoyance in a consumer headset, but given the VR-1’s premium on focus and fine detail, it feels itself like a peripheral issue.)

Then that concept car. Then a series of architectural and design use cases: standing in a room with a skylight while the light changes, then in an outdoor location. A Finnish artist’s studio that had been reconstructed by photogrammetry—a mere two hours of collecting images followed by a 24-hour render, and the studio was as visually indistinguishable from really being there. I could walk around it, look under tables, read print, all with the same clarity I’d enjoy in real life. Then an air-traffic control simulation, where I could highlight an approaching plane in midair with my gaze in order to see its landing path and figure out how best to route it to an airport gate.

The industrial promise of VR has always been that it could transform how work is done: allow for faster iteration, bring people together across oceans to collaborate, help workers accrue indispensable experience in new ways. Konttori points to the fact that full-flight simulators are incredibly expensive and thus relatively scarce, sometimes forcing commercial pilots to travel abroad for annual training. If you can do at least part of such training in the headset at your company’s national headquarters instead of flying to a different country to do it—well, that’s a seductive pitch for any company.

“We work with carriers and airplane manufacturers,” Konttori, says, “and one of the carriers told us that it’s roughly two pilot-training sessions to recover the cost of the headset and PC to drive it.”

So yes, for you and me, $6,000 is a lot of money. But when your ledger sheet uses three commas, and that $6,000 helps change the way you design buildings, build cars, and train employees? Then it’s profit in disguise.