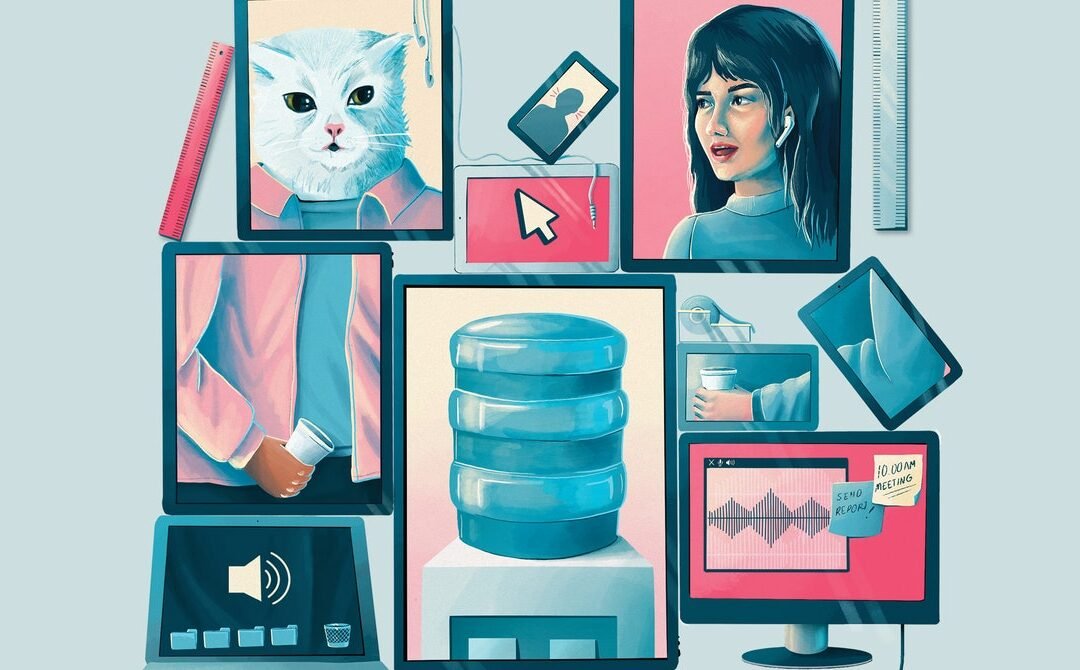 One year into our all-remote existence, executives at white-collar companies are realizing two things. One is that they’re pleased (stunned, even) by how productive employees have been. They’d worried that “work from home” would turn into “Netflix and chill.” Instead, their people are killing it: Deliverables are being delivered, milestones milestoned.

But companies have run into a serious problem. They have lost serendipity. Sure, colleagues are connecting on video chat. But it’s all very planned and formal; there are no how’s-it-going encounters at the coffee station. This is a shame, because those chance run-ins help cement a sense of togetherness, and they can engender new ideas too—like when the VP of HR eats lunch next to a salesperson and casually mentions a new market that winds up being worth millions.

So now people are wondering: Could software replicate some of that office magic?

Various startups are giving it a shot. One is Teamflow, a browser-based app that lets you set up a virtual office that you view from above, in 2D, sort of like a cartoony Ikea floor plan. You can set up different rooms and fill them with furniture icons (or even weird memey images, if you want a MySpace vibe). When employees log in, their faces appear in tiny round video streams. You drag your icon around the virtual office to hang out “near” others, and voice-talk to them too; the closer your icon is to a colleague, the louder they sound. Move farther away for peace and quiet.

It sounds kooky. Frankly, it looks kooky. But early users tell me it replicates many of the dynamics of in-person hanging out. “This really streamlined my life,” says Rafael Sanches, the cofounder of Anycart, a food-shopping service. We met recently inside his company’s Teamflow space. The little video icons for Sanches and me were perched at his virtual desk; three engineers were clustered together, chatting, in the corner of the office. Sanches dragged his icon over to say hello to them, then zipped back over to me.

“I do this all the time,” he says. He’ll plant himself near groups of employees, where they’ll work together, sometimes in silence, other times chitchatting. Sanches will also frequently invite an employee to wander off to a corner to talk one on one. He likes the fact that other employees can see that he’s meeting with someone individually; it replicates some of the quasi-public nature of conversation in a real office. “Socially, the engineers know I’m still there, like I’m around,” he notes. He’s not vanishing into private Zoom calls with people.

The whole thing felt oddly gamelike. That makes sense, because video games pioneered the art of letting far-flung people hang out online. Some workers have even playfully used games as meeting places during the pandemic. When the author and artist Viviane Schwarz was working on a project last year, she met her team inside Red Dead Redemption 2, a cowboy fighting game. They’d sit around a virtual campfire and talk shop (while also watching out for danger: “Was that gunshots?”). Some new copresence apps, like Bonfire and Remotely, riff explicitly off game aesthetics and let you hang out with workmates as avatars in a 3D environment.

One thing you can see, in all these remote experiments, is that audio beats video. Zoom-staring into a webcam is wearying. So most of these apps actively downplay full-screen video, and users seem to like that. Pragli, another virtual-meeting startup, gives users a choice to connect with audio or video, and its cofounder, Doug Safreno, estimates that people use the audio-only method twice as often as video. Consider this the revenge of the old-school telephone call: Turns out we just want to talk.

And, more subtly, to listen. Many of these apps allow for a bit of the ambient eavesdropping that happens in an office, where you can look across the room and see that two colleagues are talking—maybe even get a sense what they’re discussing—without fully tuning in. This semiprivate, semipublic nature of office chat helps give a team a proprioceptive sense of itself, one that’s too often missing in our remote world of one-on-one calls.

An office has power dynamics, for good and for ill; part of how we navigate a job involves keeping tabs on how others interact. Is your manager talking to the boss a lot? Maybe it means your team is in trouble? Or that you’re impressing the head honcho? We gather intelligence, chew it over with colleagues, become more connected.

One benefit of the physical office, in other words, is that it lets us low-key creep on each other. It turns out we might want some of that even in our software.